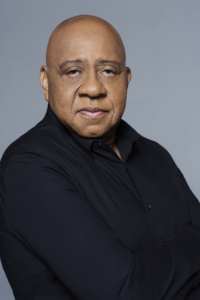 Veteran actor Barry Shabaka Henley draws from a rich history of acting in many high profile films, television shows and theatre productions. He most recently appeared in the hit Oscar nominated film A Star is Born with Lady Gaga and Bradley Cooper. He is currently starring in the new CBS Chuck Lorre comedy Bob ♥ Abishola, and ABC’s Marvel’s Agents of S.H.I.E.L.D. Shabaka can also be seen appearing with Eddie Murphy in the biographical comedy Dolemite is His Name, which premiered at the Toronto Film Festival to rave reviews. Perhaps the biggest testament to Henley’s talent is his professional collaboration with director-producer Michael Mann, who has cast him in multiple projects including his films, Ali, Collateral, and Miami Vice as well as the HBO’s series Luck starring Dustin Hoffman. Henley’s other film work includes starring in the big budget hits The Terminal, Rush Hour, Patch Adams, How Stella Got her Groove Back, Bulworth, and Carrie with Chloe Moretz. Born in New Orleans, Henley currently lives in Los Angeles with his wife and son.