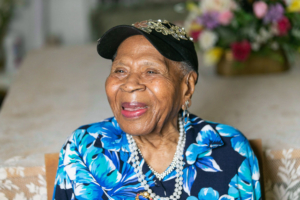 Mamie Lang Kirkland was born in Ellisville, Mississippi in 1908. Mamie still remembers the panic that filled her family’s home in 1915 when her father and his friend, John Hartfield, had returned urging them all to flee an approaching lynch mob. They resettled in East St. Louis, Illinois where they endured the anti-black riots in 1917 and then migrated to Alliance, Ohio as the Red Summer of violence erupted in 1919. John Hartfield was a victim of the Red Summer of violence when he returned to Ellisville and was killed in one of the most horrific lynchings of the era. As her family continued to migrate North, the Ku Klux Klan followed with threats against their home and family every step of the way. 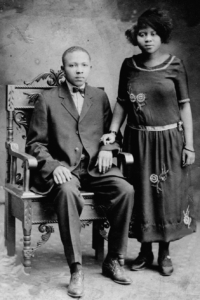 By the time she was 11 years old, Mamie had already experienced the worst of what America had to offer to African-Americans during the Jim Crow era. But her life was just beginning. At 15, Mamie married Albert Kirkland and moved with her husband to Buffalo, New York in 1923, to start a family of their own. Mamie gave birth to nine children and today she is the matriarch to six generations of descendants. After her husband’s early death, she became a super saleswoman for Avon products. In her lifetime, she has seen two world wars, the great depression, the first atomic bomb, and the first man on the moon. She has lived through 20 presidents, including the first black president – something that she never imagined would happen in her lifetime.

Whenever Mississippi came up, Mamie’s repeated response was “I don’t even want to see it on a map.” But everything changed in 2015 when her son, Tarabu, showed her the first documented piece of evidence of John Hartfield’s lynching in a report by the Equal Justice Initiative. Tarabu convinced her to return to Mississippi to confront the violence and trauma that she had endured – and to begin to heal. 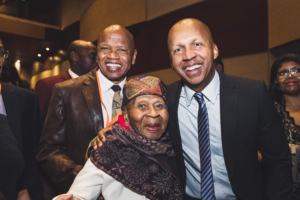 Upon her return to Mississippi, Mamie and Tarabu connected with the Equal Justice Initiative and her story was featured on the front page of the New York Times. She was honored by EJI first in 2016 at a fundraiser in New York City and again in 2018 at the Opening of the Legacy Museum in Montgomery, Alabama. Her story is one of the permanent installations at the museum.

Onstage with EJI in 2106, Mamie Kirkland declared, “I left Mississippi a scared little girl of seven years old. Now I’m 107 and I’m not frightened anymore.” After more than a century of racial violence in American history, Mamie endures as a symbol of hope and resilience for multiple generations of African-Americans.